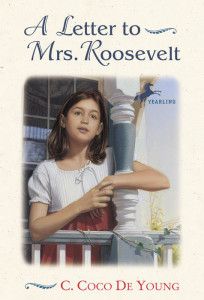 A Letter to Mrs. Roosevelt
Written by Carmine Coco deYoung
Random House, 1999
Download a pdf of the teacher’s guide

As a former educator, I am most grateful to Random House Children’s Books and Pat Scales for the excellent, detailed guide below.

ABOUT THE BOOK
Set during the Great Depression, A Letter to Mrs. Roosevelt is a heart-warming story of an 11-year-old girl’s courageous attempt to save her family’s home.

The Great Depression has disrupted the safe and secure life that Margo Bandini has grown to enjoy in the small town of Johnstown, Pennsylvania, where she lives with her parents and younger brother. In school, Margo has studied Black Thursday and the Domino Effect. She has watched hobos come to her house for food, witnessed Sheriff Sale signs on the houses of her neighbors on Maple Avenue, and has taken notice when Papa comes home with produce as payment for repairing shoes.

But, the dark days of the Great Depression take on a new meaning when she comes home from school and sees a Sheriff Sale sign on her house. Desperate to save her family from economic despair, Margo writes to Eleanor Roosevelt for help. When she receives an unexpected reply, Margo scores a victory for her family and learns the true meaning of brotherhood.

TEACHING IDEAS
A Letter to Mrs. Roosevelt is a story about brotherhood, courage, fear, pride, and family relationships. The vivid portrayal of the time period and the heart-warming reality of a family’s struggle to survive economic devastation will help students understand this dark period in America’s history.

The powerful themes, the courage of the 11-year-old main character, and the strong sense of story make the novel ideal for a novel study or read-aloud. This guide offers activities for using the novel to connect language arts, social studies, health, careers, music, and creative drama.

PRE-READING ACTIVITY
Tell students that Eleanor Roosevelt was a champion for human rights. Read aloud Article I from the Universal Declaration of Human Rights: “All human beings are born free and equal in dignity and rights. They are endowed with reason and conscience and should act towards one another in a spirit of brotherhood.” Discuss with the class the meaning of different ways of showing brotherhood. Then ask students to find an article in the local newspaper about someone who has demonstrated brotherhood, summarize the article in one sentence, and display their sentences on a bulletin board.

THEMATIC CONNECTIONS
Brotherhood
Briefly summarize the meaning of brotherhood by referring students back to the pre-reading activities. Ask them to discuss how Mr. and Mrs. Bandini show brotherhood. Who else in the Maple Avenue neighborhood displays brotherhood? Cite evidence in the novel that Miss Dobson, Margo’s teacher, is dedicated to helping others. How can we carry on Eleanor Roosevelt’s “spirit of brotherhood?”

The Victory Medal WWI, US Army

Courage and Fear (Courage and Honor)
The Great Depression caused a lot of fear among the American people. Have the class discuss Margo’s greatest fears. How do her parents help her deal with her fears? When does Margo show courage? Ask students to discuss what they think Margo’s most courageous act is. Why does Mr. Bandini think that his “Victory Medal” will give Margo courage? Ask students to think about what they would say to Margo if they were presenting her with a “Medal for Courage.”

Family and Relationships
Discuss how the Great Depression affected family life. Compare Rosa’s family to the Bandini family. How does each family deal with the economic strain of the Depression? What could Rosa’s father learn from Mr. Bandini? Describe how each member of the Bandini family pitches in to help when things get tough. How do you know that Mama and Papa Bandini have respect for one another?

INTERDISCIPLINARY CONNECTIONS
Language Arts
Adlai Stevenson once said, “It’s better to light a candle than curse the darkness.” Engage the class in a discussion of the meaning of this quotation. Ask students to write a letter that Eleanor Roosevelt might have written to Margo commending her for “lighting a candle” instead of “cursing the darkness.”

Social Studies
Miss Dobson, Margo’s fifth-grade teacher, tells the class that the Great Depression began on October 24, 1929, a day called Black Thursday. Ask students to research the cause and effect of Black Thursday. Then ask them to write a front-page article that might have appeared in the Johnstown, Pennsylvania, newspaper on October 24, 1929.

Health
Charlie has osteomyelitis and is hospitalized for four months. Franklin D. Roosevelt is struck with polio and confined to a wheelchair. Find out the cause of each disease and the treatments. Find out when the cure for polio was discovered. Have students locate information about the hospital in Warm Springs, Georgia, where Franklin Roosevelt went for treatment.

Careers
Miss Dobson tells Margo that she is a good writer and should consider a career in journalism. Have students find different job opportunities in journalism and where in their state or region they can study journalism.

Music
Ask students to think about the music from Annie. Then have them select appropriate songs like “It’s a Hard-Knock Life” from the musical and decide how they would apply them to Margo Bandini’s story. At what point in the novel might Margo sing “Tomorrow?”

Vocabulary/Use of Language
The vocabulary in the novel isn’t difficult, but students should record words that are unfamiliar and try to define them using the context of the story. Such words may include superstitious (p. 4), ledger (p. 7), mortgage (p. 18), inauguration (p. 27), and collateral (p. 54).

Additional Curriculum Resources
Special thanks for the suggestions listed below to Mrs. Risa Rummell, Grade 3 Teacher, Johnstown, PA – listed in “Who’s Who Among America’s Teachers.”

SCIENCE
What causes Osteomyelitis?
Was penicillin available in 1929?
Radio was the main source of news. When was the TV invented?

SOCIAL STUDIES
What was the Dust Bowl?
Where is Ellis Island?
What were Italian immigrants seeking when they came to the United States?
What jobs were available for immigrants in Johnstown?

EXTENSION
What would you take if you were Margo’s age and could pack only one suitcase?
How do you feel when you see the Statue of Liberty?