Life is an adventure! That is what inspires me to write. Be a sleuth and uncover clues which may help you to know me a little better. Have fun.

FAIRY PRINCESS to HOBO QUEEN
In was a long ago birthday that I pretended to be a fairy princess for the day, and duly dubbed my brother and all at my party as loyal servants! However, I am truly a hobo queen, among the latest in a long line of many wonderful women. It all began with research. As a writer, I have traveled all across the United States and to other countries meeting many interesting people.

Two of my favorite people to interview also became dear friends – The Hobo Whittler and New York Greenie. These men and many others rode the rails while looking for work during the Great Depression. Let me add right here and now that this was and still is an EXTREMELY DANGEROUS and ILLEGAL venture. Stories told to me by Whittler and Greenie captured my mind and heart as a writer. I have developed a love for this part of American history as well as the town of Britt, Iowa, the people who live there, and the hobo family.

I was proud to serve as the 2008 National Hobo Queen and dedicated my year of service as the queen to our American soldiers and veterans.

INTERVIEWS
When I travel to interview a person it is to gather information for the stories I tell as a writer and storyteller. Those interviews have led to many adventures. When you open my books, I hope the characters will take you by the hand, and my adventures will become yours as you travel with them throughout the story.

THE SHY GIRL
Wow was I ever shy growing up! I spent a great deal of time reading about the adventures of many different characters, especially Nancy Drew. My favorite place to read was at the Cambria County Public Library in Johnstown, Pennsylvania. At that time the library was located on Washington Street, in a building that has been there since 1891. You can see pictures of the building by clicking on the link to the Johnstown Area Heritage Association.

The building is no longer the library, but a wonderful flood museum. However, the marble steps that led to the children’s section on the second floor still exist. When I was young, I would peek to make certain nobody saw me (remember I was quite shy), then walk up and down those old steps several times to hear my heels click. Yes, you guessed it – I also took dancing lessons at the Kelly Dance Studio, and tap was my favorite. Though the library has relocated to Main Street, my heels still click on the marble steps of the flood museum. Yep, you bet I still tap my way up those steps!

TRINKETS OF TRIVIA:
Those old marble steps were there…

Long before my grandparents arrived in the United States from Italy

47 years before the second Johnstown flood in 1936

56 years before the invention of the Slinky

80 years before Neil Armstrong walked on the moon

88 years before the third Johnstown flood in 1977

Those steps have seen a lot of history…and water!

THE FEARSOME FOURSOME
This is a photo of the four Coco children taken in 1963. My sister, Risa, is the sleeping baby; my kid sister, Joselle, has the pixie haircut; and my brother, Larry, has curly hair. As for me…the hairdo and glasses were quite popular just before I became a Beatlemaniac. Okay, are you done laughing? I told you growing up was the toughest thing I’ve ever had to do! 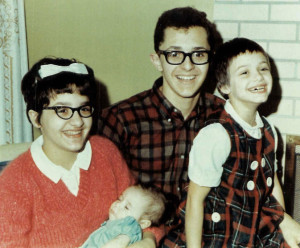 ORGANIZATIONS IMPORTANT TO ME
HOMES for the BRAVE (Male and Female)
Our daughter, Lauren, served a 400-day tour of duty in Iraq. A social worker by profession, she recognizes the need for better care of our veterans. Please take a moment to learn more about the valiant effort to provide homes for our heroes.

KICK for NICK
A precious story and campaign to honor one of America’s fallen heroes, Nick Madaras.

APPALACHIA SERVICE PROJECT (ASP)
Dad always took us on fun trips to the hardware store. I love gadgets and tools, and working with families is why ASP is special to me. I’ve learned how to frame and deck a roof, frame inside and outside walls, sheetrock and spackle walls, and plaster ceilings. Mr. De Young, our children, and I have enjoyed working on ASP.

A BETTER CHANCE PROGRAM (ABC)
The De Young family has been involved in ABC for nine years, and Christina, our host daughter, will always be a special member of our family.

RELAY for LIFE
Cancer can be a very scary word, and maybe you or someone you know has cancer. Take another look. Do you see the word “can” in there? Believe that you CAN feel better. Believe that you CAN help another feel better. To all who walk the Relay for Life…thank you. To all who wear the pink and yellow bracelets, ribbons, and other signs of support…thank you. To the doctors, nurses, and those who continue the research for a cure…thank you. We CAN all beat this together! 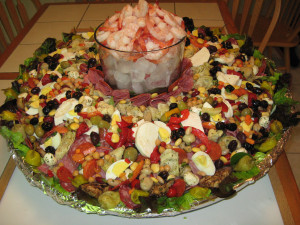 One of my favorite things to do is to build an antipasto!

THINGS I CAN’T RESIST DOING:
Asking too many questions
Staring at the stars
Smiling at the moon
Hugging my kids, even if they are taller than me

THINGS I CAN’T HELP DOING:
Asking too many questions
Telling my kids to think safety first then have fun
Humming or tapping along to the music

THINGS I ABSOLUTELY WON’T DO:
Stop asking too many questions
Peek to the end of a story
Drive or ride in a car without a seatbelt
Go skydiving again (it was fun, but my ears were clogged for a week)

TRUTH & TRIVIA:
Favorite Children’s Book: The Secret Garden by Frances Hodgson Burnett
Favorite Story: A Christmas Story by Charles Dickens
Favorite Character: Scrooge
Favorite quote: “When you sell a man a book, you don’t sell him 12 ounces of paper and ink and glue–you sell him a whole new life.”—Christopher Morley 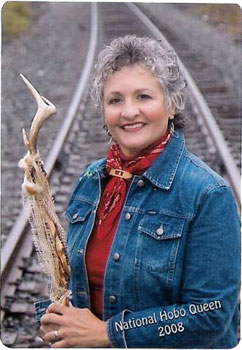 WHY a Hobo Queen? 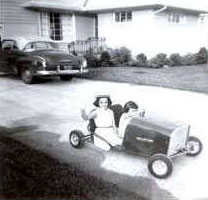 Ciao! We're off on another adventure. That's me waving at you from the Cocomobile, and the crazy driver is my kid sister, Joy. She's a much better driver than she was back then. Look at the car in the background. Can you guess about what year this picture was taken? 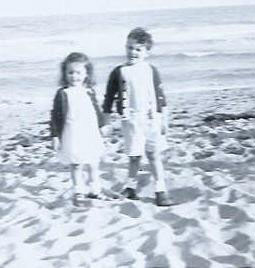 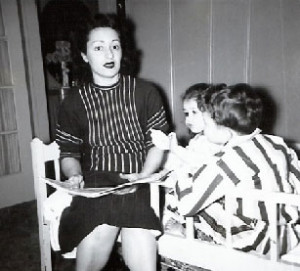 There was always a story to be told in the Coco home. My brother, Larry, and I listened as Mother read to us. My favorite stories were told at the dinner table, where Dad and Mother shared their childhood experiences of growing up during the Great Depression. 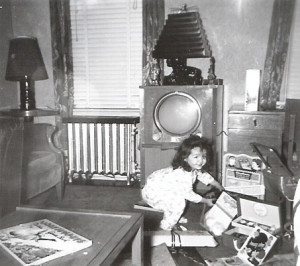 Christmas has always been my favorite holiday for many reasons. You can't see the Christmas tree in this photo, but take a peek at the big box behind me. Can you guess what that was? Hint: the big circle in the center was a screen. 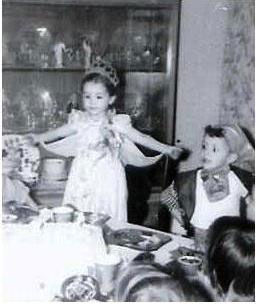 COLORS:
Bright yellow on a rainy day
Baby blue or forest green on any day
Red in the autumn

WORD:
This word frees my weary brain! You’ll find it in another section of this website. Happy hunting!

QUIRKS:
I LOVE theater popcorn...the next day when it's stale and chewy!